I drive away then. Quickly. From Irmler to Irmscher. A portrait in Opel colors for Steffan Irmler’s birthday today. 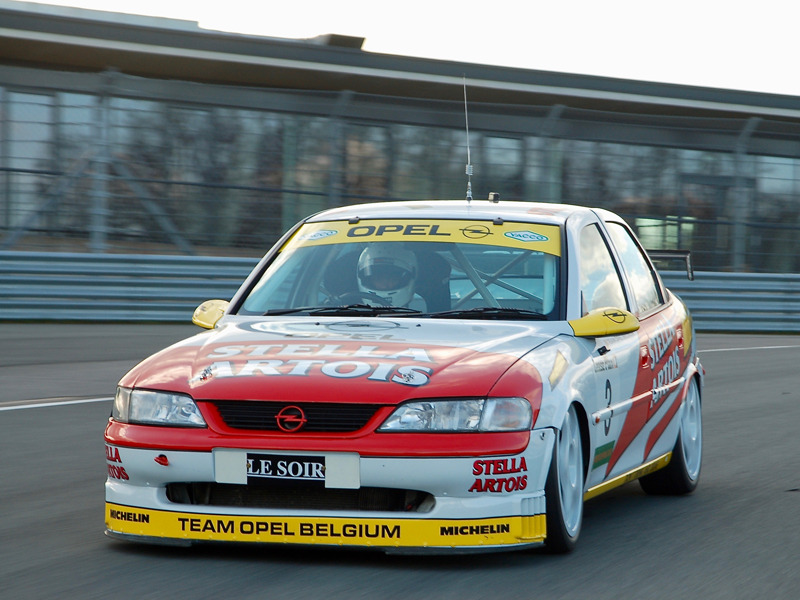 “I’m off then.” In 2001, this sentence became the leitmotif for the actor and comedian Hans-Peter “Hape” Kerkeling from Recklinghausen. He not only made a pilgrimage to Santiago di Compostela in Spain via the Way of St. James, but later published a book about it. It became a bestseller, as did the audio book. In 2015 followed the film adaptation with Devid Striesow in the leading role. Steffan Irmler from Drebber in Lower Saxony can hardly hide a certain similarity to Hape Kerkeling. And although the 51-year-old is no professional joker today, he is also often in the public eye.

And he approached his current field of activity in a similarly refreshing way: As a schoolboy, he sent a life-changing application letter. The main difference: it was not the large stages that were his preferred destination, but the no less large platform for touring car racing in Germany. Both were finally heard, as companion Carsten Krome reports.

October 26, 1991, DMV Münsterland Cup race, Nürburgring-Nordschleife: At the tenth and final evaluation run of the Veedol endurance cup, a white Opel Corsa A with fine, light gray diagonal stripes starts in group H up to 1,300 cc. The front-wheel drive vehicle has only been involved since the summer months, and its owner is a 22-year-old youngster from Lower Saxony: Steffan Irmler, Opel enthusiast and racing driver. He soon draws attention to himself with the exotic Corsa, which he built himself at home in Drebber in the Diepholz district with his father Eberhard.

But not only that: once a year he visits the German Touring Car Championship, in short: DTM, in the neighborhood, at the Air Force base. Steffan Irmler combines a special episode with the airfield race, which in its heyday mobilizes more visitors than the county town of Diepholz. In the run-up to the airfield race in 1985, he, who is still a schoolboy, sends an application letter to a team manager in the DTM: Ludwig “Luggi” Linder from Pfronten in the Allgäu. For Winfried “Winnie” Vogt from Waldshut, he uses a white BMW 323i E30 Group A with fine, light gray diagonal stripes. Steffan Irmler is fascinated by the lightweight, highly efficient racing touring car with the brightly singing inline six-cylinder engine – he definitely wants to go there, because if he wants to do it on a voluntary basis, he wants to be let through to the paddock with his scooter. 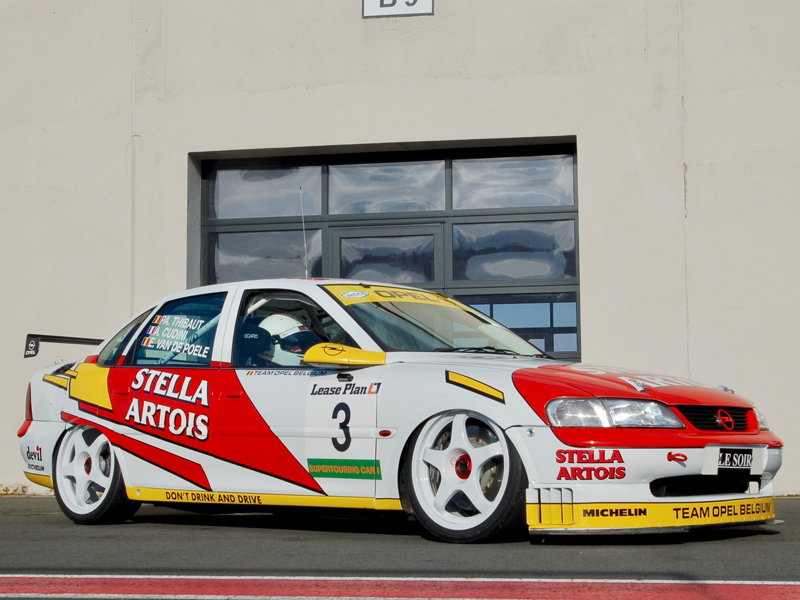 Indeed: Ludwig Linder shows a heart for the boy from the Lower Saxony province – Drebber, Drebber, where is that, please? Linder himself comes from a region that is known for alpine tourism and timber construction, but not for automobile racing. Before the 1980 Grand Touring Car Prize at the Nürburgring-Nordschleife, no one knew him outside of the Allgäu mountain home.

But then he, the “Luggi” from the mountains, brought a red BMW 320i Group 2 to the German race of the European Touring Car Championship in the Eifel. He puts the Austrian Dieter Quester on the valance, who promptly turns the fastest training lap – but before the start, the load simply does not roll: out and over! Everyone gets to hear the drama, and somehow they close the unlucky person from the vacation paradise to their hearts. In 1983 he returned to the European Championship with the very first BMW 323i E30 Group A, Winfried “Winnie” Vogt was his fast pilot – a new dream couple in the touring car scene, the southern German duo rushed from success to success.

In 1985 Ludwig Linder arrived in the German Production Car Championship. He creates a two-car team, his cars are white with light gray diagonal stripes – and at the Diepholz airfield race, a young guy from the area is involved: Steffan Irmler has actually made it, found his voice, prevailed. A few years earlier, Hans-Peter “Hape” Kerkeling did no different. The boy, who needs to get some fresh air, bravely writes down one stage and one radio station after the other – until he finally arrives.

The boy wants to know! – a formative time for Irmler

It is a formative time for Irmler, who is still a minor. After the Diepholz racing weekend in 1985, he was invited to further missions. He gets to know the Zolder race track in Belgium and the Swedish racing driver Per-Gunnar “Peggen” Andersson.

Six years later, he will own his second own racing car, an Opel Corsa A, and decorate it in white with light gray diagonal stripes just like the 1985 Linder BMW 325i. The way there is initially a yellow Opel Kadett D in the Group H. The trigger for the passion for fast, sporty front-wheel drive vehicles with the flash in the radiator is the Opel tuner Helmut Kissling from Opelhausen, pardon: Oberhausen.

Steffan Irmler spends a lot of time in the racing workshop there, getting to know key people like Helmut Kissling’s sons Christian and Stefan, but also the DTM driver Heinz-Friedrich “Bimbo” Peil better and better. At a meeting at home with the Kisslings, the “1.6 liter 16V Big Block” project comes on the table. Such a unit should open up new dimensions in a Corsa A 1.600 that was built by hand.

The small front-wheel drive car will celebrate its debut in the summer of 1991. The area of ​​application: as before, the Veedol endurance cup on the Nürburgring-Nordschleife. With the yellow Opel Kadett D, Irmler, who arrived in his twenties in 1989, familiarized himself with the Eifel course. At the same time he also met Volker Strycek, who has been a star since winning the German Production Car Championship in 1984. He sits in the 1989 DTM in an Opel Kadett E, which he, as a trained automotive mechanic, largely prepares himself for his assignments.

It is a coincidence that Irmler and Strycek move into their workplaces next to each other in Helmut Kissling’s additionally rented workshop: It’s easy to get into a conversation, because people like to exchange ideas, the professional gives the young man valuable tips because he quickly notices: The Boy doesn’t just want fresh air, the boy wants to know! At the time, both hardly suspected that the two would be racing together three decades later, of course on an Opel with front-wheel drive.

Tuning: Going his own way

A lot happens, for example in 1990. Steffan Irmler decides to go his own way before the Opel Corsa A premieres. He parted ways with Kissling Motorsport and will be doing the tuning himself. It was not until 1999, after the devastating fire in Helmut Kissling’s new company in Bad Münstereifel, that the Opel enthusiast and his former initiator came together again. He supplies him with MBE cable sets and control units to accelerate the use of the intact Group A (customer) vehicles. In 1999 a magazine with 77,000 copies sold was established on the market every month: “flash Opel Scene International”.

Eight years earlier, on the occasion of the Essen Motor Show 1991, the new title came onto the market with surprising success. Steffan Irmler makes it into the pilot edition with the Opel Corsa A. Then the 22-year-old’s racing career, which has just started, stops. He prefers to continue his education and to become self-employed in 1995. In Rehden he opens his own workshop with a focus on racing and tuning. Customers from the national sport, slalom and rally drivers will be his main focus in the next ten years.

A happy coincidence results in a new, a second business model: test plugs. Another decisive development step followed in 2006: Steffan Irmler (37) opened a specialist company for precision mechanics and CNC manufacturing in his home town of Drebber. Test plug adaptations are his specialty – a guarantee of growth. At this time, the entrepreneur and family man made a decision on reason: After 15 years of standing, he sold the Opel Corsa A. The self-imposed abstinence from touring car racing did not last very long. In 2009 there was a BMW 325i Group A in Switzerland, which came from Ludwig Linder’s era – but is not a Linder BMW. “Liesal”, an original built in 1986 from the first season of the German Touring Car Championship, is a former inventory of the Vogelsang BMW racing team from Recklinghausen.

In 2009 there was a BMW 325i Group A in Switzerland, which came from Ludwig Linder’s era – but is not a Linder BMW. “Liesal”, an original built in 1986 from the first season of the German Touring Car Championship, is a former inventory of the Vogelsang BMW racing team from Recklinghausen.

Irmler returns to the race tracks after 20 years of absence 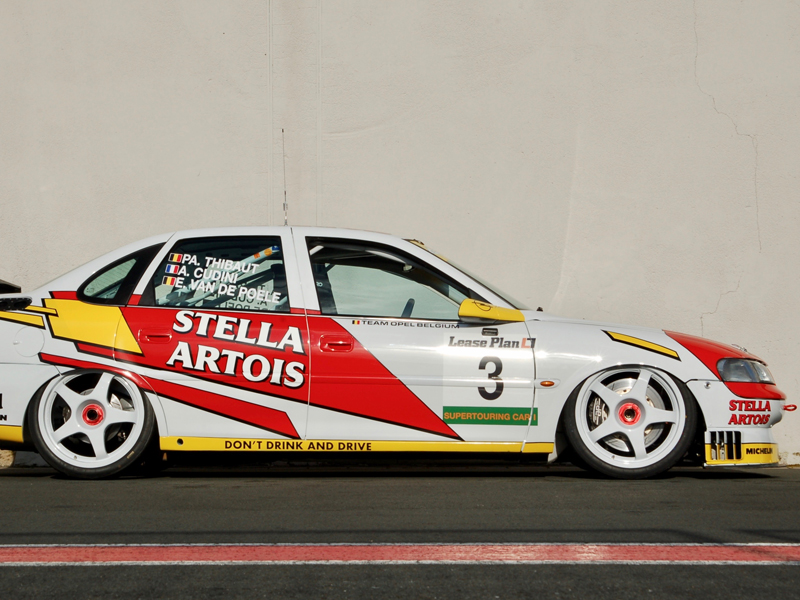 In 2015, Steffan Irmler senses that he wants something different and additionally purchases a South African Opel Astra notchback from the early years of the two-liter super touring car regulations. He makes the Rüsselsheim racer roadworthy again, in 2016 he entered the newly created Touring Car Classics. At the Salzburgring he shares the cockpit with the former Opel factory driver Alexander Burgstaller – a pioneering achievement in the newly created racing series for classic racing touring cars. Irmler, now 47, is returning to his roots, he is back in his element, and in 2017 he is driving with Opel leader Volker Strycek.

At the end of the 2017 season, he sold the BMW 325i Group A after a reunion with the Bonn DTM heroes Olaf Manthey and Marc Hessel to Ralph Bahr, the main player in the touring car classics. He continues to expand his stock of original Opel parts and racing bodies: from South Africa, he brings the sister chassis of the Astra notchback to the Diepholz district, from Sweden a Vectra A, which Jeff Allam once drove in the British super touring car series. Both vehicles are restoration cases that are still a long way from completion.

At the AvD Oldtimer Grand Prix at the 2018 Nürburgring, the existing Briggs-Astra notchback also joins this series. A shot by a Swiss BMW driver pulls Steffan Irmler out of orbit. The incident leaves considerable damage.

“I drive away then. Quickly”

Aware of the fact that he owned several Opel racing touring cars that were significant in terms of sport history, but none of them in roadworthy condition, Stefan Irmler decided to purchase another two-liter super tourer on the British Isles. This is the Opel Vectra STW that was involved in a skirmish at the penultimate race of the ADAC Super Touring Car Championship at the Nürburgring in 1999. The participants: Uwe Alzen in the black factory Opel Vectra from Holzer, Christian Abt in the in-house Audi A4 Quattro – and Roland Asch in the previous year Vectra of the tuner veteran Günther Irmscher from Remshalden. The silver-gray four-door was originally built by Konrad Schmidt in Cadolzburg and was driven by Franz Engstler from Wiggensbach. Roland Asch occupies the cockpit in the farewell year of the STW championship.

With a push – intentionally or not – in the final round of the 1999 STW semifinals at the Nürburgring, he and the Irmscher-Opel go into the annals of motorsport with the Ronal rims in 19-inch sizes cast specifically for this project . After the controversial maneuver that is still being talked about 20 years later, the new era of the DTM 2000 begins in Germany. The Vectra is sold to England and continues to be used.

Steffan Irmler discovered him at a British festival in 2018. He soon reached a deal with the owner and brought the 1998 chassis back to his country of origin. On the occasion of the Bremen Classic Motorshow in February 2019, the Irmler – Irmscher – Vectra constellation is publicly mentioned for the first time.

Almost three decades after entering the racing business, it can be said aloud: In 1989, when he started to make his (fast) laps, many people thought that “Irmler” from afar was an “Irmscher” – which, of course, was a mistake was. The circle has since closed. The possible motto is: “I drive away then. Quickly”.